When the RPE fails to function properly, fluid accumulates underneath the retina or within the RPE, causing a minor detachment and visual distortion. Normally, central serous chorioretinopathy affects only one eye at a time. However, it might affect both eyes at the same time in some cases. 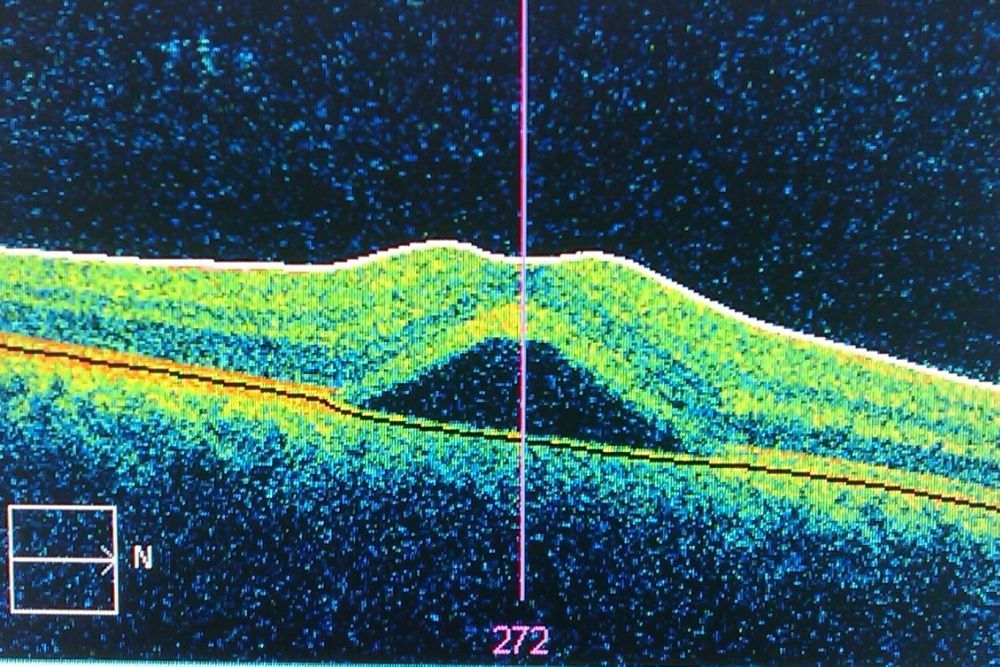 Central serous retinopathy (also known as central serous choroidopathy) creates a blister-like swelling in the retinal layers, as shown in this picture from an OCT scan. 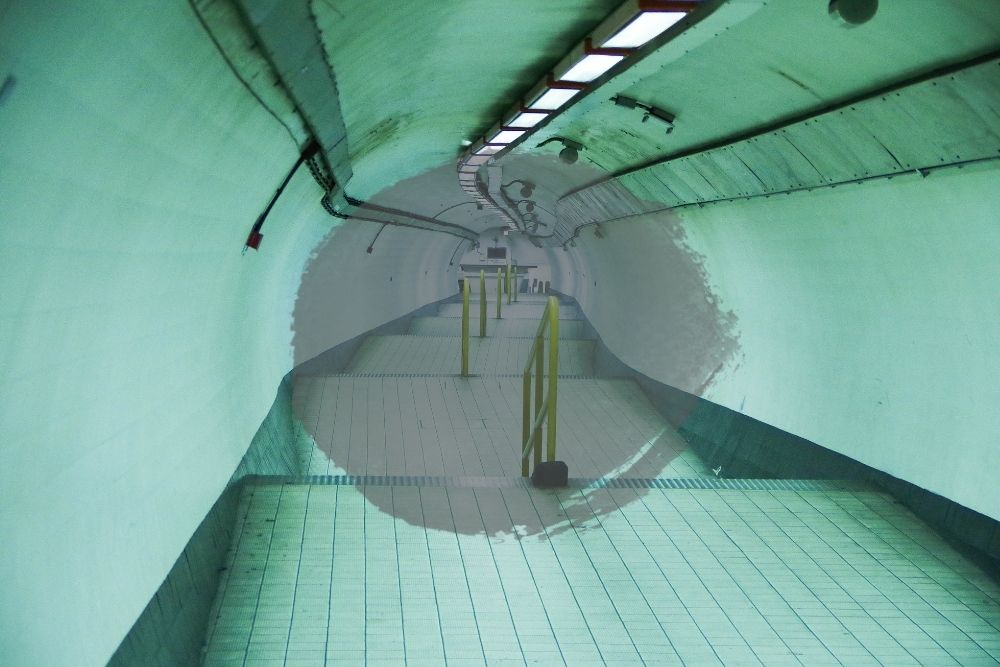 The following are some of the signs and symptoms of central serous chorioretinopathy:
● central vision that is distorted, darkened, or obscured
● a dark spot in your field of vision
● straight lines in your affected eye may appear twisted or uneven
● objects may appear smaller or farther away than they actually are
● when seeing a white object, it may appear to have a reddish tinge or to be duller in color

What Are the Symptoms of Central Serous Chorioretinopathy? 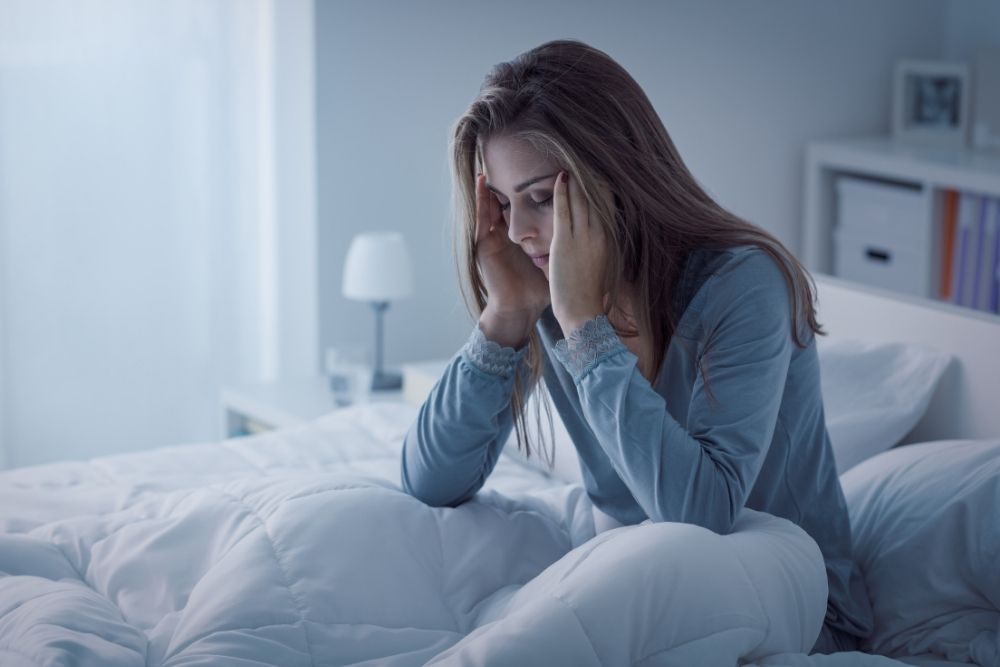 Other variables that can cause central serous chorioretinopathy include:
● steroid use
● Helicobacter pylori infection
● autoimmune disease
● Insomnia, sleep apnea, and other sleep disorders
● hypertension

Diagnosis of Central Serous Chorioretinopathy
To examine your retina, your ophthalmologist dilates (widens) your eye with dilating eye drops.

After that, he or she will take specific photos of your eye and perhaps do fluorescein angiography. A dye is injected into a vein in your arm during fluorescein angiography. The dye reaches every part of your body, including your eyes. As the dye flows through the retinal blood vessels, the doctor takes photos of your eye. The orange color will draw attention to any abnormalities in your eye. This can aid in the detection of areas affected by central serous chorioretinopathy.

Your doctor can also use optical coherence tomography (OCT) to examine your retina. The back of the eye is scanned by a machine, producing comprehensive three-dimensional images of the retina—this aids in the measurement of retinal thickness and the detection of retinal edema. 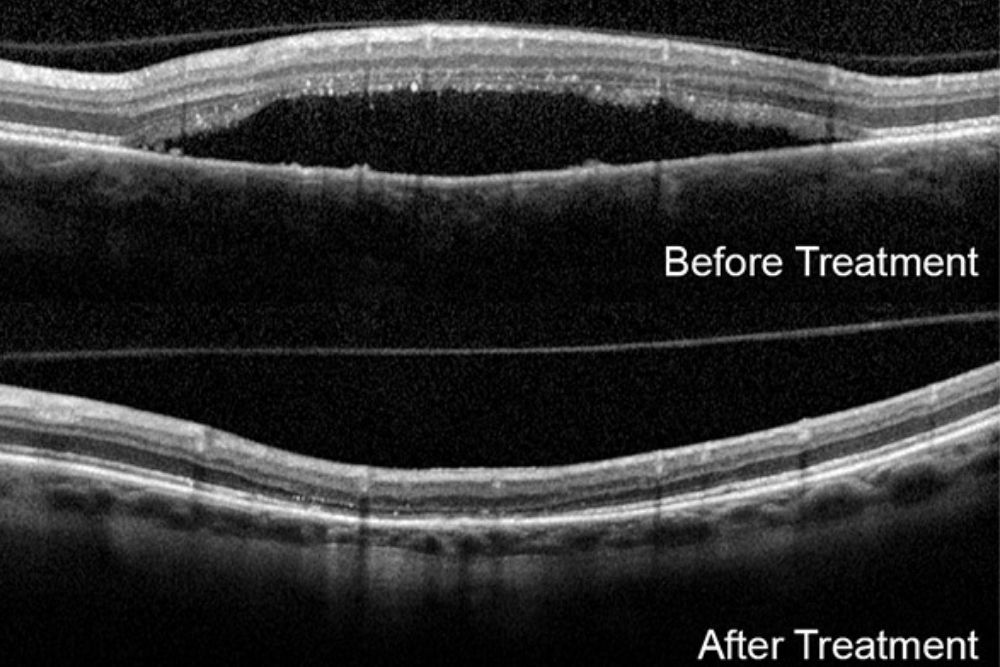 Most cases of central serous chorioretinopathy go away on their own after a month or two. Your ophthalmologist will examine your eye during this period to evaluate if the liquid is dissipating. Severe visual loss or persistent leaking are both possible outcomes. Laser eye treatment, photodynamic therapy, or oral medicines may be performed in certain circumstances. These treatments can stop the leak and help you see well again.

Even without treatment, most persons with central serous chorioretinopathy regain good eyesight. However, vision may not be as good as it was prior to the illness. Therefore, it is critical to see your ophthalmologist for follow-up checks on a regular basis because long-term fluid accumulation can result in chronic visual loss.