Parents nowadays are having a difficult time limiting screen time for their kids. Today’s children have gotten used to various devices at their fingertips. It is becoming harder each day for them to live in a world without smartphones, internet, and other electronic devices.

Yes, digital devices are definitely helpful in many ways when it comes to entertainment and educational purposes. However, too much screen time can be harmful especially for kids at a developing age.

The American Academy of Pediatrics advises parents to limit screen time on their children at a reasonable amount of time. Banning phones at dinner tables, avoiding texts and games at least 2 hours before bedtime, and limiting the use of devices about 2 hours a day are only some ways to protect your children from the harmful effects of too much screen time especially to their vision. 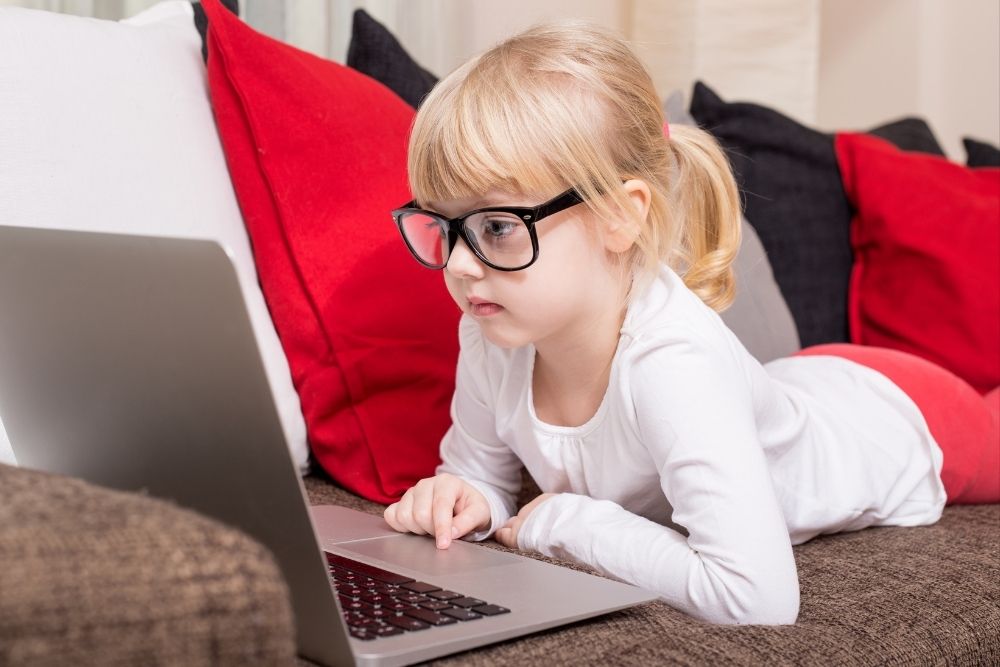 What Exactly is “Screen Time”?

“Screen time” includes any activities done in front of a screen. This covers all entertainment and educational activities on digital devices such as watching TV, playing video games, or working on a computer. Screen time is a sedentary activity which means being physically inactive and requires very little energy.

Studies show that as kids grow, their screen time also grows with them. Surprisingly, even very young kids these days are spending a notable amount of time staring at screens.

The Vision Council states that 30% of parents report their children encounter at least one of these symptoms after more than two hours of screen time a day:

These symptoms can affect social interactions and academic performance of children. The fast-rising cases of myopia, or nearsightedness, globally has been associated with prolonged use and exposure to electronic devices.

Why Blue Light From Screens Can Be Bad for You

The screens of computers and other digital devices emit a broad spectrum of visible light. Most light rays are harmless. Though, the high-energy visible light, called “blue light”, is the harmful portion.

Blue light is composed of shorter wavelengths and higher energy compared to most visible light rays. Laboratory research suggests that certain bands of blue light can be harmful to the light-sensitive retina of the eye. Blue light also greatly affects the body’s circadian rhythm which is the internal clock in our brain that sets the levels of alertness and sleepiness at regular intervals across a 24-hour period. It is commonly known as our sleep/wake cycle.

Too much exposure to blue light at bedtime makes you more alert and disrupts your normal sleep/wake cycle, which can lead to serious health consequences. 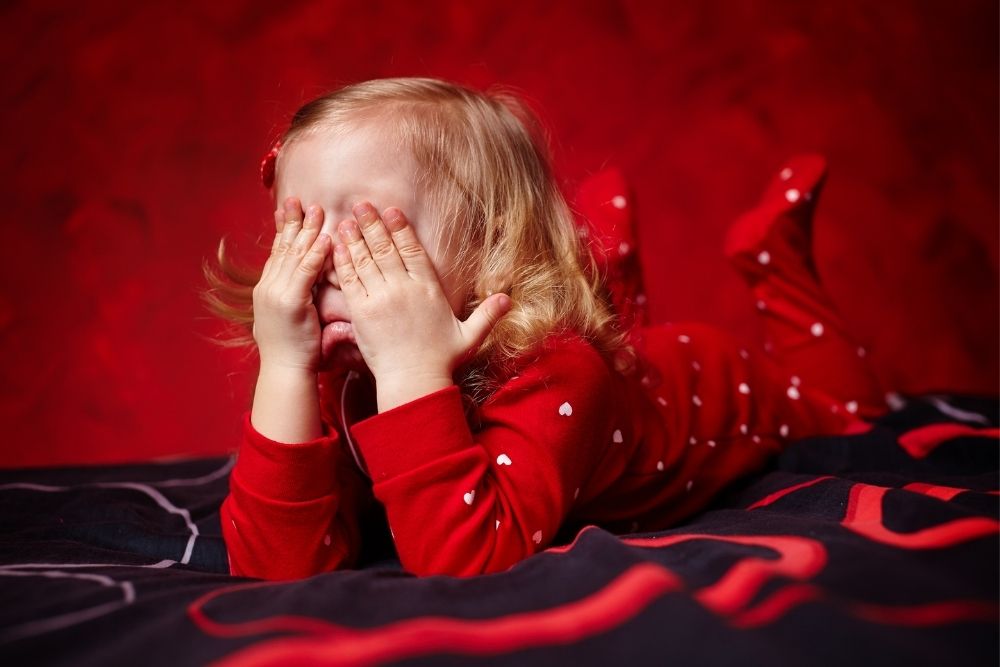 The Potential Harmful Effects of Too Much Blue Light for Kids

Not only do computers, tablets, and smartphones emit harmful blue light. Take note, the sun emits the highest amount of blue light which is an added exposure above blue light exposure from digital devices.

Timing is another factor to consider in blue light exposure. Blue light from the sun only happens in daylight but blue light exposure from screens can occur at any hour of the day. Potential risks from excessive screen time for kids can be categorized as immediate or long-term.

These occur soon after repeated blue light exposure. This involves circadian rhythm disruption induced by staring at digital screens late at night, which makes it harder to fall asleep.

Sleep disruption can lead to daytime drowsiness and poor performance in school. It may also lead to weight gain and obesity-related health problems. Research also shows that disrupted 24-hour sleep cycles can cause mood disorders, greater feelings of loneliness, lower levels of happiness, and may develop ADHD symptoms.

It will presumably take a few decades before the long-term effects of prolonged screen time for children are better understood. But medical experts are already suggesting to limit blue light exposure from an early age to protect children’s vision.

In this study, 79 eyes were implanted with a clear intraocular lens (IOL) that do not block blue light and 52 eyes received a yellow IOL that can block blue light. Two years after cataract surgery, none of the eyes with yellow IOL showed any new or worsening signs of macular degeneration (AMD). However, 15% of the eyes that received clear IOL showed new or worsening signs of AMD.

The results of this study imply that the retinas of aging eyes are more vulnerable to oxidative damage from blue light. This makes it wiser to limit blue light exposure to avoid premature aging of the retina.

The greatest benefit may transpire when protective measures are taken as early as childhood when the lenses of the eye are exceptionally clear and allow the greatest amount of blue light to reach the retina. 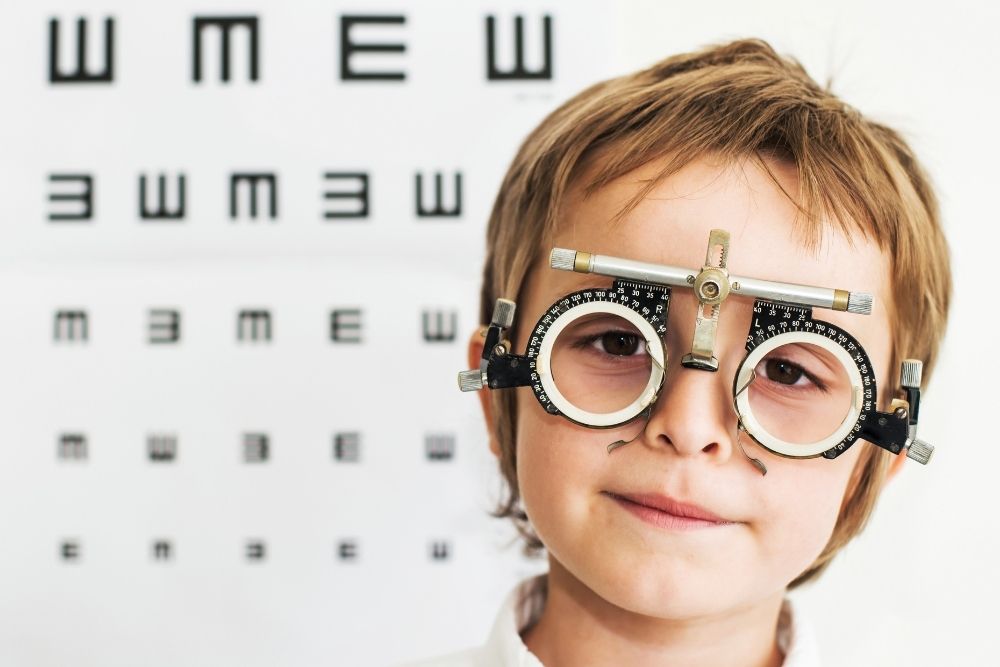 Since the sun emits more blue light compared to digital devices, it is best for children to wear sunglasses outdoors for protection. There are also options for tinted eyeglasses or anti-reflective coating to reduce the amount of blue light that enters the eyes from screens.

Another option is photochromic lenses which automatically transition into a darker tint to block blue light outdoors without the need for a separate pair of prescription sunglasses. Yet the best option for superior protection from harmful blue light from the sun is a pair of polarized sunglasses for outdoor wear.

You can also use the blue light filtering features on smartphones and other devices such as night modes and blue-light-blocking apps.

Tech companies now have time management features and apps that enable screen time monitoring for parents to limit daily blue light exposure of their children. Aside from blue-light filtering screens and glasses, spending more quality time together as a family and less screen time with your children left to their own devices may also help in limiting screen time.